LAHORE - A three-day thought-provoking and memorable Faiz Festival concluded at the Alhamhra Arts Council on Sunday.  On the last day of the 5th mega event, a large number of people from different walks of life visited the venue and attended different programmes. The festival was organised by the Faiz Foundation Trust (FFT) in collaboration with the Lahore Arts Council. On the third day, various events were held in three halls of the Alhamra, including dance performance by a private school, discussions were held on “The Future of Cinema” and “Pakistan: They way Forward”. During the discussion on “The Future of Cinema” the speakers, including Sarmad Khoosat and Vasay Chaudhry, threw light on challenges which the cinema industry was facing besides giving suggestions to improve things. In a discussion on “Pakistan: The Way Forward”, Nafisa Shah, Dr Ayesha Ghaus Pasha and others underlined the need to make collective efforts for progress and development of the country. They said positive approach to handle different problems was of utmost importance.  Strengthening of democracy and institutions were significant to bring about positive change in the country, they added.  It was necessary to improve living standard of the poor of society so that they could also play an active role in development of the country. Besides, intellectual discussions, exhibition and literary sessions were also part of the event. 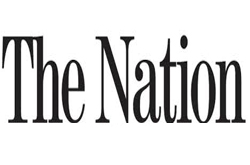